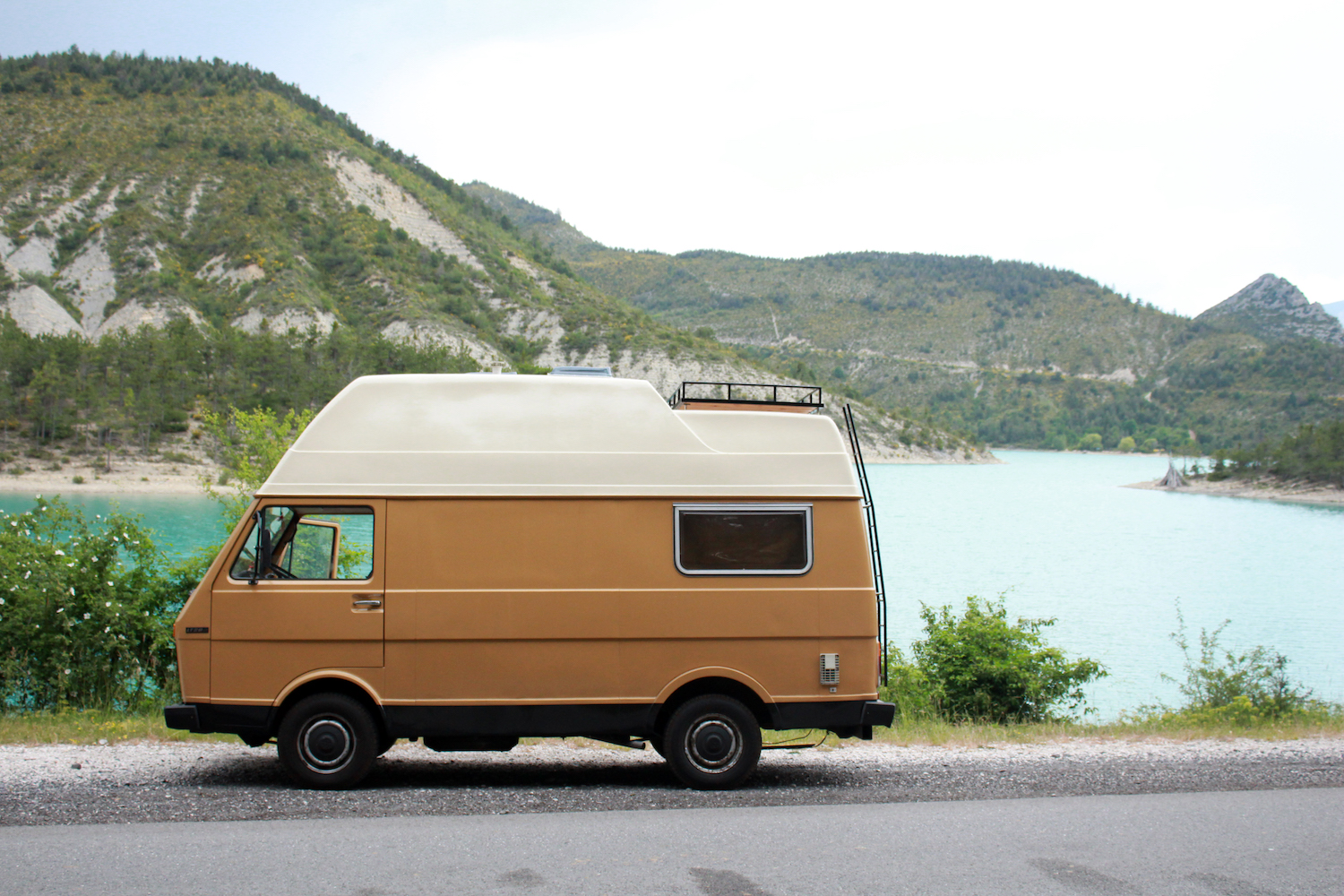 The Open Road of Provence, France

After restoring and insulating my 1977 VW LT camper van, my boyfriend, Pedro, and I hit the road for the first time to explore the region of Provence, France.

We wanted to seek reward for all the hard work and love we put into our van! While we didn’t have any furniture installed yet, we decided to just place an air mattress and some boxes on the empty floor of the van. Combined with the perfect old carpet from my grandmother, we were ready to seek some adventure. Starting in Germany, our destination was the Southeastern region in France, a wonderful place called Provence-Alpes Côte d’Azur.

This specific location is known for its beautiful and fragrant lavender fields. Since we were too early in the season to experience the blossoms, we decided to find out what else the region had to offer. We were pleasantly surprised by the incredibly rich and varietal nature and scenery throughout our route!

We traversed France from north to east, then south, where we passed villages in which time seemed to stand still for decades. Our only reminder of being in the present age were the modern cars parked along the roadside. It took us two days to arrive at the foot of Mount Ventoux, a beautiful mountain towering over all surrounding landscape.

It is the highest mountain in the region and has been nicknamed “the Beast of the Provence” or “The Bald Mountain”. Although we arrived after dawn, I had my mind set on waking up at the summit of 1912 meters high on the winding road in front of us. I think I was determined to prove how much our old van can truly handle! The road was fairly steep, so we drove slowly in second gear. As we continued on and the forest cleared, I found myself feeling proud of how badass our old engine was.

This road has gained fame through its inclusion in the Tour de France cycling race and is covered by colorful and motivating paintings. When the summit finally appeared in the distance, it was already dark and the sea of lights from the valley provided a magical view. Finally, we arrived at the very top and parked the van. This moment in time stick outs as memorable because it spoke to us once again: you can do it. We were so excited as we anticipated what the daylight would reveal in the morning! We woke up at 5AM from the freezing wind blowing around the van’s roof.

The sun was just about to rise and everything was bathed in purple light. Mountain crests appeared in the dust and the curvy road was covered in white gravel, painting a path that looked covered by snow. Before the summit grew crowded with training cyclists, we began our descend. After a day in Avignon, we spent the evening at the ocher quarry of Rustrel. They extract pigments of different earth colors for artists to use and call the area “the Colorado of the Provence.” While Europe does not have its own Grand Canyon, this specific location can be thought of as similar. We were impressed with its colorful rocks and striking scenery! We knew we had to stay close for another day of breathtaking views so we camped in the nearby forest.

In search of refreshment, we made our way to the Mediterranean Sea. We passed green lavender and lovely red poppy fields and bathed in the lake of Sainte-Croix. Another magical moment to be remembered. As we continued on our journey, palm-lined roads appeared and we soon found ourselves in the vibrant waterfront of St. Tropez.

We parked the van between expensive limousines and mingled with elegant bathers in a small bay. Above us, mansions lined the hillside for a beautiful backdrop. The seawater was dark blue and clear with a slight view of white yachts in the distance. We knew we had had to find a suitable place for the night so we kept our experience here brief then headed west. Our goal was to find another beautiful bay. We found a lonely one, which was pretty and exclusive, two things we love! Next stop was the Giens Peninsula. In her lagoon, a former saline, where wild flamingos live. We climbed onto the high top of the van and enjoyed the amazingly wild view. After a couple of days at the beach, we drove back inland to see more canyons, rocks and lakes.

The wilderness of this area is completely fascinating! We found some mountain roads that led us to Castellane, a lovely village with a 184 meter high limestone rock and a church from the 12th century on top. We hiked to the top and enjoyed an amazing view! We passed it on our way to the Gorges de Daluis, a six-kilometer-long canyon formed by the river Var. However, it seemed endless to us because of its adventurous, winding road along the gaping abyss. The roadway clinged to dark red cliffs and lead us through 17 tunnels. By this point, dusk was falling and we luckily arrived in the village at its northern end before dark. The next few days were filled with exploring the area by foot and hiking into the gorge to get a feeling of its depth.

The light grey riverbed formed a majestic contrast to the majestic red cliffs. We even met other van dwellers in one of the tunnels! As our adventure comes to an end, we’ve been slow to drive home. The last leg has been filled with discovering other nice villages, rivers to bath in, and lakes to relax near. If you ever choose to follow our path, we highly recommend choosing the slow season for a more exclusive experience!