Off the Main Road in Europe

By The Amazing Vanlife CommunityDecember 09 2020 No Comments

We are Charlotte and Ken from Belgium.

Two people who are madly in love and share a passion for traveling (and whiskey), documenting our travels online as Off the Main Road. After being stuck in the rat race for too long, we decided it was time for a new direction in our life. So instead of following the beaten path, we chose to wander off the main road. We bought a 13-year-old box truck, converted it into a tiny house on wheels, and left off to see what’s over the hill. Our journey started in January 2020 and the plan was to travel the European continent for about a year. We would be chasing the sun down south during winter and follow her back up north during summer. The first 2 months everything went according to plan. We were able to enjoy the sun, sea, and of course, sangrias in southern Spain while it was freezing in Belgium. But shortly after we crossed the border to Portugal, shit hit the fan.

Covid-19 started its rampage tour all over the European continent and quickly everything changed.

All of a sudden there were queues outside the supermarkets, masks, and gloves were obligated inside and half of the shelves were empty. Campsites were closed and public beaches became forbidden territory. The biggest problem for us was that even water taps were shut and even though there was a limitation of movement, the police would chase us away.

It was clear that fear had taken control. So after a couple of weeks hiding in some remote parts of Portugal and a quick visit to Lisbon, which looked more like a ghost town than a European capital, we decided to get back to Belgium and wait for the Covid-19 storm to pass. Back in Belgium we were lucky to find work straight away and started saving up for our future travels.

After 3 months it became clear that the pandemic was not going to stop raging and we decided to test our luck once again. In the end, the van is all we have. And if we want to wait for the storm to pass, we might as well do it in better weather… So by mid-September, we left Belgium and set forward to Greece to hopefully spent winter in milder temperatures. The first thing we found out during the second part of our off the main road vanlife adventure is that fear is no longer in control. Everybody seems to be adapting to the fact that there is an incurable virus, but that the only thing that can prevent us from it is common sense. Most people follow the instructions of wearing masks, using a disinfectant, and keeping a distance from one another very well. And it’s no longer a rare event to have a chat with random strangers, locals, or other vanlifers despite the bigger distance.

The second thing we found out is that it is impossible to make any plans when you’re traveling during these unusual times.

Borders may close, tests may be required, curfews and limitations of movement may be introduced. You never know what to expect. But for the first month, we did not experience any difficulties with crossing borders. Most EU countries did not have any regulations for travelers from other EU countries. It was only by the time we were traveling through Montenegro that we found out that the second wave of the virus was hitting hard. Belgium became the country with the highest infection rate in Europe and new lockdowns were announced in multiple countries. So if we wanted to get to Greece we had to hurry up and get there as soon as possible. From Montenegro, we traveled to Serbia and over to Bulgaria in a couple of days. Since Promachonas is the only land border open for non-essential travels this was our only option to get into Greece. We felt pretty bad about not being able to enjoy these beautiful countries for a couple of weeks, but with the rapidly changing situation and winter breathing down our necks we did not have time to hesitate. Thanks to a Belgian couple living in Bulgaria we found out that we could take a covid-test in a lab in Sandanski, a Bulgarian town about 20 kilometers from the Greek border. 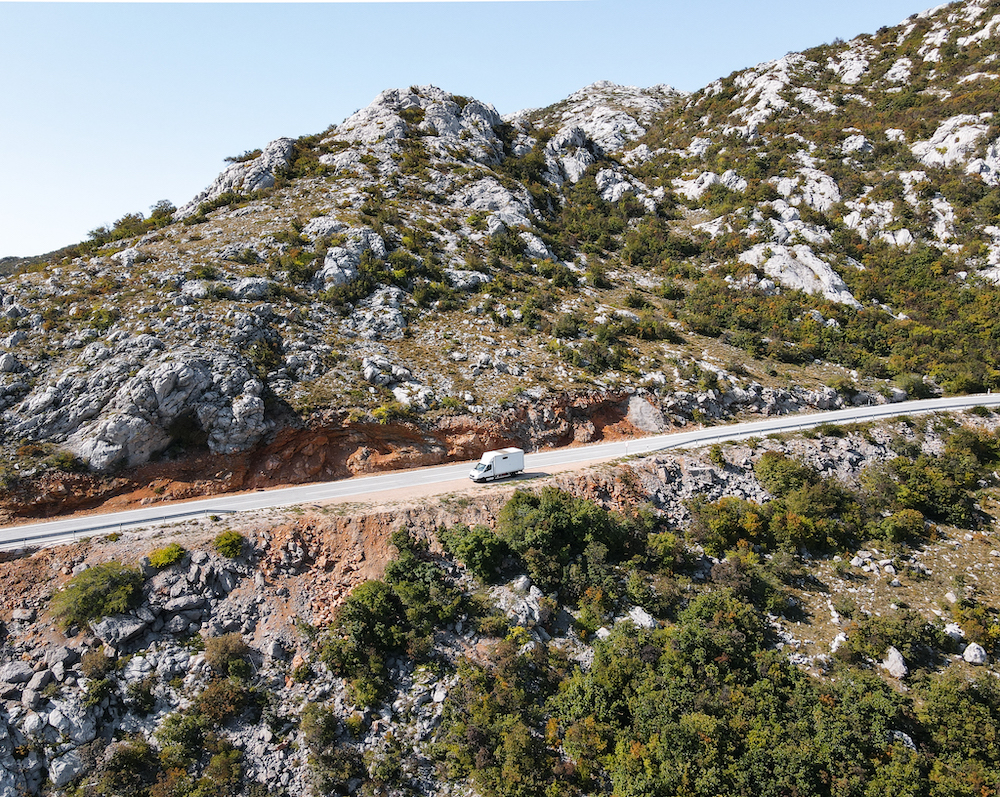 A negative covid-test is mandatory for getting into Greece, so we had no other option than to take the test and hope for the best.

After 24 stressful hours, the test results came back negative, which we had to celebrate with a fair amount of Bulgarian rakia. Armed with a negative covid-test and a serious hangover we were ready to cross the border and reach our destination for the coming winter. On the night of our arrival in Greece, we heard from local media that a new lockdown would be implemented in the following days. And indeed, 2 days after our arrival the government announced a new lockdown and new regulations.

Other than supermarkets and pharmacies, all shops are closed as well as bars and restaurants. A text messaging system was introduced to grant people permission to leave their homes only for shopping, work, school, doctor visits, or exercising. As we are not Greek citizens, we are somewhat in a grey zone and did not really know what they expected us to do…But locals of the small town near the beach where we are parked assured us that the police would not bother us. On the first night of the lockdown, however, we were woken by the police around 1.30 am, who apparently were suspicious of the box truck by the beach. We do not look like a camper and they must have thought there was illegal business going on.

When they found out we were campers, they apologized for waking us and assured us that it was no problem to stay at our ‘wild camping’ spot, but that we could not travel.

So here we are. Stuck on an idyllic beach, drinking Retsina and watching the most beautiful sunsets night after night, waiting for this ”horrible” lockdown to end. Follow along with Ken and Charlotte’s journey online through “Off the Main Road”:
Ken Coeckelberghs & Charlotte Desmet
@Offthemainroad_ Justine BelzileJuly 12 2021
Do you want to become a Go-Van contributor? Click here